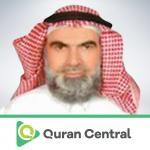 Sheikh Bassel Raoui is of a noble and prolific lineage with his father’s grandfather Saleh Raoui being a judge in Baghdad in 1936, and his mother’s grandfather Ali Al-Khatib being the director of Awqaf in Diyali province, and a preacher in its Grand mosque too.

Having graduated from the Faculty of Law and Politics after completion of elementary, middle and high school in his native place, he was appointed as a diplomat in the extension of the Foreign Ministry Center in the year 1977 from where he retired in 1990.

His retirement was a stepping stone into the world of Quran recitation as he managed to make ample use of the time he had now to delve deeper into it.

His hard work didn’t go unnoticed and unappreciated as he received a certificate in 1997 from the University of the “Imam Muhammad Ibn Saud” in Saudi Arabia, Riyadh.

His passion led him to master the Shari’a, Ousoul, and Hadeeth for which he obtained a certificate in 1998.

At present,  Sheikh Bassel Raoui devotes time to educate everyone about the Quran in addition to reciting the Holy Quran in Ibrahim Al Hasini mosque.