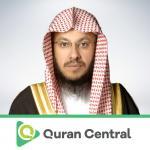 The Sheikh obtained a Bachelor’s degree in psychological sciences from Mohamed Ibn Saud University in 1410 Hijrah. He went on to secure his Master’s degree and first doctorate in 1423 Hijrah having worked as a teacher in the same University. He also joined the faculty of Al Kassim University during the same year. Thereafter, he progressed to gain his second doctorate in Sharia and Islamic Sciences.

Sheikh Abdel Aziz Al Ahmed has been an imam in many mosques in Saudi Arabia like Arrachid and Ibn Sobaih mosques in Al Kassim and Al Badaoui’s mosque in Makah. His recitations have also been recorded, which include Al Morattal (1422) and Tarawih (1414-1415).

Besides that, the Sheikh is the author of various Islamic books and has contributed immensely to the Islam World Library. He is an avid and inspirational speaker and has been invited to many conferences worldwide (the USA), TV programs such as The National Television of Saudi Arabia, Al Majd, Assharika and more.