Listen to Abdallah Kamel on: 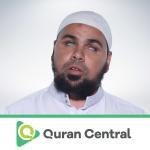 Sheikh Abdallah Kamel is a living example of this hadith. Blind by birth (1985), Sheikh Abdallah did not allow his physical impairment to define his life. Instead, he took over it and memorized the entire Qur’an by making use of the Louis Braille system.

The Sheikh’s melodious and unfeigned recitation of the Qur’an will stir your heart and will drive you to tears. His mesmerizing tilawah attracts large crowds who gather to offer their Salaah in tranquillity and khushoo.

Sheikh Abdallah Kamel is a highly respected man in Egypt. He graduated from Al Fayoum University in 2005 and went on to join the faculty of Dar Al Uloom in the same University.  He was also appointed to lead the Taraweeh prayers in in Badr Al Islami’s mosque. Whilst there, he would take weekly classes as well.  His work as a speaker also continued in a mosque in Al Kiman.

Besides the appointments at mosques and Universities, Sheikh Abdallah Kamel has also worked for the media. He had a television show, Nabadat Al Shaeir {The Poet Pulses) on Al Rahma channel, in addition to giving many lessons on the same channel. He has also hosted another television show called Al Muqri’at on Al Nass channel.

The Sheikh has also secured the first place in a competition called, Mizmar Al Dawud hosted on the television channel, Fajr.