Listen to Abdul Aziz Brown on: 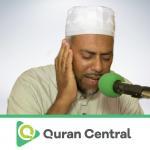 Sheikh Abdul Aziz Brown has been teaching the Qur’an for the past 20 years and specializes in Maqāmāt and Qasidah.