Listen to AbdulBari ath-Thubaity on: 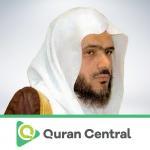 In 1405 Hijrah, the Sheikh graduated in Sciences from The King Fahd Abdul Aziz’s University of Jeddah, following which, he enrolled in the Umm Al Qura University for a higher degree in Shari’ah. He attained it in 1409 Hijrah. Thereafter, he earned his Master’s Degree from the Shari’ah faculty in 1415 Hijrah, from the same University.

At the young age of 19, Sheikh Abdul Bari Ath Thobaity served as teacher and Qur’an memorizer while supervising Qur’an memorizing sessions in Jeddah.

The Sheikh has also been honored with the position of Imam ad preacher in the Prophet’s Mosque in Madinah.