Listen to Abdulkabir Al Hadidi on: 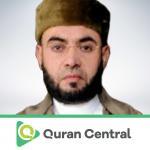 Abdulkabir Al Hadidi is born on January 1, 1963, Sheikh Abdulkabir al Hadidi was born in Essaouira, a Moroccan province. The Sheikh completed the memorization of the Qur’an in Casablanca.

The Sheikh received a certification for the same by Casablanca’s scientific council in October 1992. In addition to this, he also received a license degree specializing in the field of Islamic studies.

One of his most interesting projects is ‘Learn the Qur’an in your home’, started to facilitate the memorization of the Qur’an for every individual irrespective of age and place, with special emphasis to those who could not frequent the mosque for memorization.

Sheikh Abdulkbir El Hadidi has held the position of an Imam and a khateeb in Al Sabil mosque in Casablanca and has been teaching the Qu’ran, the sciences behind its recitation for over 20 years.

The Sheikh has also written a book about the Tajweed rules as per Warsh Aen Nafiae’s methodology titled, ‘Al Hadidi’s Masterpiece about the Rules of Tajweed’.