Listen to Abdullah Ali Jabir on: 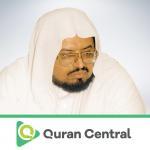 Abdullah Ali Jabir was born in Jeddah in 1373 Hijrah. He memorized the Qur’an at the tender age of 15 in Makkah.

At the age of 23, Abdullah Ali Jabir graduated from the Sharia’s Faculty of the Islamic University. Thereafter, he went on to conduct a research on ‘Abdullah Ibn Omar’s Fiqh and its Impact on Madinah’s School’ and received his doctorate in 1407 Hijrah. He became the Imam of Masjid al-Haram in the same year.

The Sheikh assumed the position of Administrative Inspector, shortly after which he joined the King Fahd Abdul Aziz University as a professor of Arab Language and Islamic studies.

An Imam and Qari of various mosques in Saudi Arabia, Abdullah Ali Jabir was appointed as the Custodian of the two holy mosques. However, he opted to lead the evening prayers in Ramadan.

The world lost this beautiful voice in 1426 Hijrah when Sheikh Abdullah Ali Jabir succumbed to a severe illness.