Listen to Ahmed Al Ajmi on: 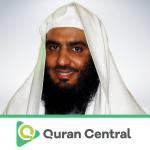 He obtained his primary education from ‘Al Mohammedia’ primary school, located in the South of Al Khobar. He pursued his high school education in ‘Azoubair Ibn Awam’ middle school.

After having graduated from Mohammed Bin Saud Islamic University, he enrolled in the Lahore Public University, Pakistan to acquire a Masters degree and then achieve a Doctorate in Qur’an Interpretation.

He also got his license in the Islamic Sharia at the University of the great Shaykh “Al-Imam Mohammed Ibn Saoud.

Sheikh Ahmed Ajmi enjoys excellence in the world of recitation. He commenced his Imamate in 1984 in Al Moghira Bin Shouaba Mosque and continued in the Great Mosque of Khobar in 1985. His recruitment as an Imam happened to Al Ahmed Bin Fahd Mosque in Khobar in 1992.

The distinguished excellence of his voice led him to produce several albums such as: “Wadaânak”, “Anashid” and so on.

The next big step was the advent of big conferences and TV and radio shows in several stations, dealing with subjects pertaining to Islam.