Listen to Ali Abdur-Rahman al-Huthaify on: 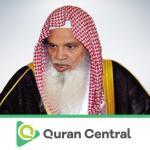 Ali Abdur-Rahman al-Huthaify is born in 1947 in Saudi Arabia and is a well-known Imam in Saudi Arabia. Abdur Huthaify grew up in a religious environment with his father, Muhammad Abdul Hudaify, being a scholar and an Imam in the Saudi Arabian Army.

He received his preliminary education at the hands of the learned in his village and completed memorizing the Holy Quran in the guidance of the Sheikh Mohammed bin Ibrahim Al Hodaifi. He also had good knowledge of forensic sciences.

In 1972, he graduated in Law from the Imam Muhammad bin Saud Islamic University and received his master’s degree in Islamic law from Al-Azhar University in 1975. This was also the same place where he acquired his Ph.D.

In 1979, he was also made the Imam of the Quba Mosque in Madinah. Finally, In 1979 he was honored with being the chief Imam of the Prophet’s Mosque – Al-Masjid al-Nabawi.

In 1981, during the month of Ramadan, he was handed over the coveted position of the Imam of the Masjid al-Haram and then he went back to Great Mosque of Medina.