Listen to Ali Hajjaj Souissi on: 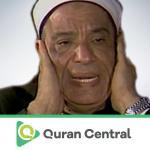 Sheikh Ali Hajjaj Souissi set foot into this world in Cairo in 1926 and is credited with extensive knowledge and understanding of the Quran Tilawat and Tajweed.

Under the esteemed guidance of Sheikh Abou Aziz Al Sahaar, a famous name among Azhari scholars, Sheikh Ali gave wings to his passion for Deen and emerged a successful man.

Completion of the Quran took him to Fadel Bacha mosque in Darb Al Jamames where he took shade under Sheikh Muhammad Refaat where he managed to master the Tajweed to perfection.