Listen to Amir Al Mohalhal on: 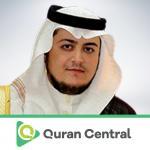 Shaykh Amir Bin Ahmad Bin Yahya Al Mohalhal, who was born in 1405 in Saudi Arabia is a name that needs no introduction with his voice being the renderer of amazingly beautiful recitations of the Quran with perfect Tajweed.

Sheikh Amir Al Mohalhal has to his credit the honor of leading the prayers as an Imam in the mosque of Bayta at the age of twelve. He carried forward his choice of career by continuing Imamate in the various mosques of Jeddah, the most prominent among them being King Faisal in Baghdadia, the mosque of Zayed Al Khair in Al Naim, and the mosque of Umm Al Muminin Khadija Bint Khuwailid in Al Zahraa no tot forget teaching Quran at Abdul Rahman Bin Auf and  Bara bin Azib mosque in Jeddah.

Sheikh Amir Al Mohalhal has been entrusted with the responsibility of overseeing Quranic memorization in governmental institutions.