Listen to Ayman Swed on: 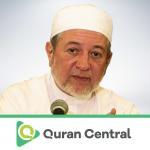 Dr. Ayman Rochdi Swed, a stalwart of Quran recitation and preaching, was brought into the Dunya in Syria in 1955.

Shaykh Ayman moved to Egypt in search for knowledge which was met with success as he obtained High readings from the Institute of Readings in Cairo in 1981, followed by Bachelors degree in the Arabic language from the Faculty of Arabic, Azhar University in 1982. Fate took him to Saudi Arabia to make him get a postgraduate Degree from the Faculty of Arabic, Umm Al-Qura University in Mecca in 1990. The  University of Umm Al-Qura and the University of Al-Azhar gave dignity and respect to this gifted Shaykh and both of them handed a Ph.D. to him in successive years.

Greatness never eluded him as he progressed by leaps and bounds under the most efficient, distinguished and able guidance of Shaykh Muhi–Eddin Alkurdi, Shaykh Amer Othman, Shaykh Ahmed Abdul Aziz Al-Zayat only to name a few.

His professional front saw him multitasking several designations important and prominent among which are rendering consultations in the International Body of Quran teaching of the Association of the Muslim World and joining hands with the Charity Association of Quran Teaching, Jeddah.

Currently, Shaykh Swed resides in Saudi Arabia and keeps himself busy by being an integral part of an animation show on Iqraa channel titled “Mastering Quran Recitation” which is a runaway success.