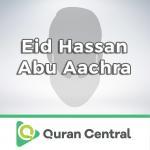 Memorization of the Holy Quran happened at the tender age of 9 after which the inclination towards Quran studies peaked further which saw him achieve certifications like in Tajweed in 1933 from the Institute of Quran readings, the Hafs Aan Assem’s certification under the supervision and able guidance of Sheikh Abdul Hakim Abdullatif Abdullah Al Masri and the Ten readings certification from Sheikh Salah ud Din Al Tijani Al Hassani.

Currently, he leads prayers as an Imam in the Egyptian shooting club mosque and in Mustafa Mahmoud mosque along with rendering his innate wisdom of Quran Sciences to the Al Azhar Institute.