Listen to Hasan Ali Moraib on: 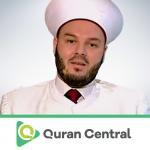 Hasan Ali Moraib set foot into the world in 1980 in Tripoli, Libya.

His childhood saw him completely enamored by the art of memorization of the Book of Allah, the nuances of Tajweed and the fundamentals of it. This led him to obviously attain a certification in Islamic Shari’a from the Faculty of Shari’a according to the Fatwa house in addition to a diploma in Islamic studies from the same university, following it with a Masters and Ph.D. in information and media sciences from the Faculty of Arts in Alexandria, Egypt.

Under the supreme and immaculate guidance of Shaykh Dr. Ahmad Al Maasaraoui., he found his giving in the form of complete and successful memorization of the Quran.

His career graph saw him attempting various jobs including being a vocal expert in Al-Fajr TV channel, a vice director of the Quranic reading affairs, a Quranic reader chooser for Al-Fajr channel amongst many more.

After having  gathered experience as an Imam and as a preacher in Omar Ibn Al Khattab mosque in Tripoli, and the mosque Al Malik Al Za’im, and in Bahae Eddine Al Hariri’s mosque, true calling came to him in the form of responsibility for the affairs of mosques in the General Directorate of Islamic Awqaf in Lebanon between 2006 and 2009,

Giving wings to his prodigal talent and efficiency pertaining to Quran, Hasan Ali has innumerable accolades and recognition to his credit namely, winning the best Quran reader competition in Lebanon in 2003 , participation in the 2004 Malaysia and Indonesia International Quran recitation competitions,  in the 2007 World Peace Conference in Mumbai, India, contribution to the establishment of the World Orphan Care Authority in 2009. The jewel in the crown is receiving a Royal invitation to grace with his presence in the Ramadan Hassaniya lessons in 2010 and 2012.