Listen to Hesham Abdelbary on: 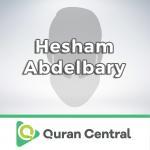 Hesham Abdelbary is a huge barrel of talent and was born in 1980 in Egypt.

He joined the Quranic School of his grandfather in order to memorize the Quran, He joined hands with his father Abdelbary Muhammad in Jordan who was an Imam and a preacher in a mosque there, after having commenced Quran Hifz.

He met many scholars in Jordan of undeniably great respect such as the scholar Sheikh Muhammad Nasser Al Albani.

During his educational journey, he obtained a Tajweed certification from the Institute of Quranic readings in Alexandria while parallelly studying with other Shuyookh who have lineage from our Holy Prophet Mohammed ﷺ such as Sheikh Oum Saad, Sheikh Adel Ahmed Mansur, and Sheikh Muhammad Sukar.

He was now solely active in teaching the Quranic reading sciences and performing the Imamate of Umm Al Mu’minin Aisha mosque in the same city.

It is of extreme importance and a matter of pride that he also has authored a book to his credit and list of achievements.