Listen to Hussein Al-Sheikh on: 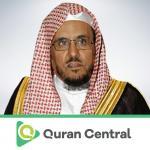 Sheikh Hussein Bin Abdul Aziz bin Hussein bin Abdul Aziz Al-Sheikh grew up in Bani Tamim, Saudi Arabia and is a prominent name to behold in the field of Imamat and preaching.

Sheikh Hussein completed his elementary education successfully and starting spreading roots towards the study of Shariah along with Law. This made him join the faculty of Shariah in Riyadh from where he attained a Bachelor’s degree. His hunger for complete knowledge led him to master with honors, with a thesis titled “The Judgment of the Limits in the Islamic Shari’a” along with a Ph.D.submitting a thesis titled “The Fiqh bases of the Islamic Advocacy”.

Sheikh Hussein bin Abdul Aziz Al-Sheikh has had the ultimate good fortune of learning under well-renowned Sheikhs, such as Sheikh Abdullah Al Jibrin and Sheikh Abdul Aziz Dawood in terms of Fiqh and Hadith, along with Sheikh Abdullah Ghadian concerning the rules of Fiqh.

After graduating, Sheikh Hussein Al-Sheikh was appointed as a lieutenant in the Hijri 1406 which was to be soon followed after as a judge in 1411 at the High Court of the city of Najran. In 1412, he was given authority to handle matters of the High Court in the capital Riyadh before shifting base to the Grand Court of the city of Medina after having served for 6 years.

Sheikh Hussein granted the coveted designation of being able to lead the prayers as an Imam in the Masjid An Nabawi, Madinah Munawarah, Saudi Arabia.