Listen to Ibrahim Al-Dossari on: 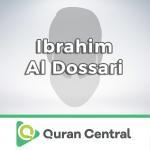 He gathered his education in Al-ImamMuhammad Bin Saud Islamic University with specialization in the faculty of  Usul ud-Din, in the Quran and its sciences and received his Ph.D. in 1994.

Sheikh Ibrahim was even certified by the “seven readings” and the “Ten Readings” according to Al Shatibiyah, Al Durra and Al Taiba under the supervision of reputed Sheikhs.

Ibrahim Al Dossari commenced his career with the ministry of education, in the Quranic memorization middle and high school in Riyadh, 1986 after which he was designated researcher in Al-Imam Muhammad Bin Saud Islamic University, in the Quranic department in 1987.

He has innumerable accomplishments in his career span namely being appointed in the “commission of Quranic readings diploma curriculum”, in the faculty of “Usul ud Din” in 2000, as a member of the “Commission of Quranic Readings Path Curriculum” in Al Mu’allimin Universities and many more.

The Islamic council in Al-Imam University included him on their board of members for two years since 2003 not to forget his role as a contributor in the founding committee of the “Saudi Islamic Association of the Holy Quran and its Sciences”  followed by being a member of the supreme council of the Qur’an memorization charities.

At present, he is designated being an Imam and a preacher in Al-Amir Muhammad Bin Abdullah Al Saud’s mosque in Riyadh which he has happily occupied since 1983.