Listen to Jamal Shaker Abdullah on: 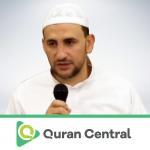 At the tender age of 10, Shaykh Jamal shifted the mast of his education towards  Umar Bin Al Khattab Mosque which enabled him to to the Hifz of the Holy Quran under the vigilant guidance of  Sheikh Mahmoud Idriss.

Sheikh Jamal Shaker kept the ship afloat by joining and studying Islamic Shari’a in the Jordanian University which was succeeded by an enrollment in Islamic University of  Al Madina Al Munawara followed by graduating in Sharia albeit under the keen and brilliant guidance of the great Dr. Ihab Fikry in Al Masjid Al Nabawi, Madina.

Finally he obtained his Masters in“Al Fiqh and its origins”followed by a Phd in the same discipline in 2009.

The blessed task of Imamat came in very early in the life of this gifted Shaykh at the age of 18 when he started leading prayers at“Al Safarini” mosque in “Zarqa”, Jordan.

He has had the honour and privilege of leading prayers as an Imam in Masjids like “Al Malik Abdullah Al Mouaasis” mosque and “Al Kalouni” mosque and mosque King Abdullah.