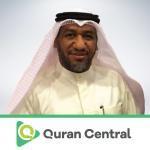 Jazza Al Swaileh is born in Kuwait in 1969, Jazza Bin Falih Al Swaileh is considered as the center point for Quran recitation in Kuwait which is his country of origin, having memorized and mastered the Holy Quran at the age of 13.

Huge names in the Islamic world of Quran recitation like Sheikh Ahmed Abdulaziz Al-Zayat, Sheikh Abdullatif from Al Azhar, and Sheikha Oum Saad from Alexandria gave certificates of authentication to this gifted Shaykh who is the best there is when it comes to the nuances of  Tilawat and Tajweed.

Sheikh Jazza Al Swaileh began his Imamat career by volunteering at the Ministry of Awqaf in Habib Al Banay Masjid in Kuwait.

Parallelly, Sheikh Jazza is an active part of media too with him presenting a TV show “And Recite the Quran” on Al Arabiya Channel.