Listen to Khalid Al Ghamdi on: 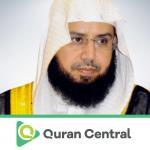 Shaykh Khalid Bin Ali Bin Abdan Al Ablaj Al Ghamdi made his way into this world in the holy city of Mecca, belonging to the great tribe of Bani Hashim of Quraysh and Al Hassan Bin Al Khalifa Ali Bin Abi Taleb.he mastered the Holy Quran at a tender age of 16, under the supervision of  a Pakistani Shaykh.

Khaled Al Ghamdi enrolled into the Umm Al Qura University, in the discipline of Da’wa and Usul al-Deen where he garnered useful insights and a rock solid guidance under the able motivation of Sheikh Muhammad Saleh Al Habib, Sheikh Muhammad Al-Mukhtar Al Shanqiti, and Sheikh Muhammad Al Khader Al Naji. it was here that Shaykh Khaled obtained his coveted Ph.D. degree as well.

He has been an integral and inevitable part of the Saudi organization of the Holy Quran, and the Advisory Committee in the Ministry of Islamic Affairs, Mecca.

His professional career as an Imam commenced at the Sheikha Bint Abdul Rahman Al Saud Masjid and the mosque of AL Khayf In Mina, following it with an illustrious job as an Imam in Masjid Al Haram on the request of the late King Abdullah Bin Abdulaziz Al Saud. He continues his promise to this very day albeit in pairing with Sheikh Bandar Baleela and Sheikh Yasser Al Dossary in successive years.