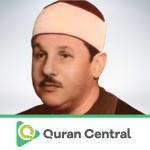 Mahmud Ali Al Banna, born in Sobrabas, Egypt in 1926, is a name that commands deep respect and gratitude for stepping into this world and blessing us with his Quran recitation and preaching prowess.

After completing Quran Hifdh under the well-known Shaykh Musa Al Muntash at the age of 11, he spread his roots by shifting base to educate himself in Theology from Sheikh Ibrahim Ibn Salaam Al Maliki in the Ahmadi Mosque, Tanta.

In the peak of his career, he had already been serving as an Imam in Ain Al Hayat Mosque, in Al Rifai Mosque, in Al Ahmadi Mosque and numerous other Masajids before finally, settling down to lead prayers in Al Imam Al Hussein Mosque till his soul left this Dunya in 1985.

Prince Abulkarim Al Khattabi noticed the prodigal talent of this prolific Sheikh granted him a job in the radio station in 1948. He has also had the extreme privilege and good fortune of having recited the Holy Qur’an in the blessed Holy Mosque of Jeddah, the Masjid Al Nabawi, the Umayyad Mosque, Al Aqsa Mosque naming only a few in his plethora of achievements.