Listen to Malek Shaiba Alhamd on: 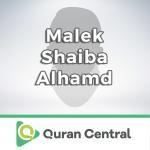 Malek Shaiba Alhamd is the Quran reciter par excellence and of the highest repute, he was admitted into this world in 1983 in Egypt.

Like most reciters from Egypt, after completing his elementary education, Shaykh Malek too set foot into the famous Al Azhar Institute where he received formal education from the praiseworthy Sheikh Ayman Shawki. This was succeeded by procuring certification according to Hafs A’n Assem’s recitation from Al Shatibiyyah and the Sanad to our beloved Prophet Muhammad ﷺ, not to forget a word of high appreciation from Sheikh Muhammad Jibril on having witnessed his recitation of the Holy Quran.

Sheikh Malek Shaiba Alhamd stepped into his professional world by taking up Imamate in Al Mahrousa mosque in Mohandessin, in Al Tawheed mosque in Shubra, in Al-Qadi Yahya mosque in Helmeih among a list of others.