Listen to Maria Ulfah on: 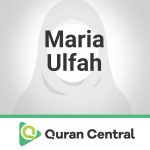 Hajjah Maria Ulfah is an Indonesian Qari and manager of the Central Institute for the Development of Quranic Recitation. Maria is the winner of two Indonesian national Qur’an recitation contests and is internationally recognized as one of the world’s master reciters and teachers of recitation.

She is also a lecturer at the Institute for the Study of Qur’an and at the National Islamic University in Indonesia, as well as the first woman to win an international Qur’an recitation award in Malaysia in 1980.

She’s considered an internationally significant figure in the field, and has been referred to as Southeast Asia’s premier female reciter of the Qur’an.