Listen to Mohamed Maabad on: 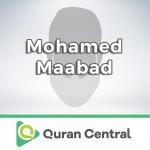 Mohamed Maabad is born in 1934 in Nazlet Tarjem, Egypt, the name Sheikh Mohamed Ahmed Mohamed Maabad resonates with an excellent Quran reciter and a teacher of huge respect.

His education in the light of Quran saw him complete Quran Hifdh at the school of Al Azhar Al Sharif at a tender age of 11. He continued his pursuit in educating himself further and this led him to get certified in Tajweed of the Quran according to Hafs A’n Assem from Al Shatibiyyah and Imam Nafiae’s recitation under the able guidance and insight of  Sheikh Abdul Azim Khalil Sweilem who has been an eternal pillar of strength and support alongside another great man named Sheikh Abdul Fattah Al-Qadi.

His tryst with professional Imamat brought him to lead prayers at the Grand mosque in Sol, being appointed as a member of the Egyptian Maqari’a, affiliated to the Ministry of Awqaf in Cairo, Giza, and Beni Suef.

His career took another route when he commenced work at Ruwaida Al Muhamal School in Saudi Arabia and simultaneously at Masjid Al Nabawi, Madinah.

He has had the extreme good fortune of having taught and guided many gems in the field of Quran recitation namely Ahmad Muhammad Othman, Ahmad Taj Eddine Al Soudani, Ibrahim Ahmed Atia and many more who are the fruit of his persevering labour.

Sheikh Mohamed Maabad left for his heavenly abode in 2009, albeit with a legacy of good work noteworthy among which is “The Useful Summary in the Science of Tajweed”, and “Hints of the Quranic Sciences”.