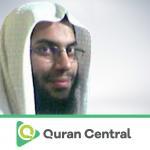 Mohamed Shaaban Abu Qarn is born in 1984, Egypt and going by the pseudo name  Abi Assem, Sheikh Mohammed Abu Qarn, who is known by Abi Assem, is a name that is not devoid of any introduction in the world of Qur’an recitation, Tajweed, and Imamat.

His extraordinary achievements include having led prayers as an Imam at the age of 15 only and also having completed Hifdh of the Qur’an the year after.

He was an excellent student even after as he successfully sought certification in the Tajweed and in the Shari’a together with a high certification of Quranic readings. He added another golden feather in his cap when he turned into a specialist in the “Ten Readings”. He graduated from the renowned Al Azhar University from where he shifted base for further studies to Umm Al Mu’minin Institute in Alexandria to study the Shari’a guided by the able and eminent Shaykh Dr. Ahmad Farid.

An enviable professional graph for this Shaykh is no less of a feat as he was a  member in the Egyptian centers Sheikh Al Maqari’a of Ahmed Issa Al Maasaraoui, a teacher in the institutions like Preachers Institute in Motobas city, Dar Al Firdous Al Aala in Alexandria, and in Dar Hajr Al Sulmi Institute of the Qur’an memorization in Mecca, Saudi Arabia. It goes without mentioning that success always prioritized him as he went on to preside over the Audit Committee of the Quran in Al Azhar University.

It is of commendable mention that Sheikh Mohammed Abu Qarn has numerous certifications by the following books: Al Minhaj Explanation of Sahih Muslim Ibn Al-Hajjaj, Al Ahwadhi masterpiece with the explanation of Jamia Al-Tirmidhi, Safwat Al Tafasir of the scholar Al Sabouni, Al-Taysir of the Seven Readings by Abi Amr Al Dani, etc.