Listen to Mohammad Almonshed on: 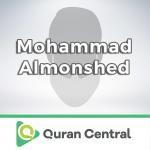 Shaykh Muhammad Bin Muhammad Bin Ahmad Al Barshaoui Al Minyawi, going by the pseudo name “Almonshed”, is touted to be probably the Kohinoor in the crown of Qur’an reciters. Born in 1962 and brought up in Barsha, Egypt.

Mohammed Almonshed has had a good career graph with him overseeing the Quranic memorization courses In Al Azhar Al Sharif University in the early eighties, being employed in the Chamal Al Said radio as a reciter to leading prayers as an Imam in the Shakra province and being a member of the Committee for the Quran in Al Azhar.

Sheikh Al Munshid is well known for his heartwarming recitation of the two parts Al Naba and Tabarak according to Warsh and Khalaf An Hamza recitations and the whole Quran according to Hafs A’n Assem’s recitation.