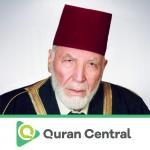 Mohammad Rachad Al Shareef is born in 1925 in Khalil, Palestine, Mohammed Rashad bin Abdul Salam bin Abdul Rahman al-Sharif, was a unique talent of sorts with expertise in the Quran and Tajweed, calligraphy, writing, and poetry. He is believed to be the biggest blessing to the Islamic world.

Having studied the Qur’an at the age of 18, he was molded into an able and excellent reciter by the gifted Sheikh Hussein Abu Sunaina who himself was a product of Al Azhar University. He also placed firm faith in him by certifying him by the Hafs A’n Assem’s and Warash Aen Nafiae’s recitation.

Shaykh Rachad has profound expertise and experience with Al Ruq’ah script, Al Thuluth script and the Persian script. His tryst with professional milestones began with him having taught the Arabic language for 30 years in Al Khalil University and various other institutes of education. His profound knowledge on the Quran recitation saw him taking under his wings many stalwarts of the Tilawat e Quran mainly his own son Maarouf, the Imam of King Abdullah’s mosque among many others. He was the designated as the general supervisor by the ministry of Awqaf of Quranic schools in Palestine.

Sheikh Mohammad Rachad Al Shareef passed away into the ages in 2016 in Oman, after a long, fruitful and prosperous life at the age of 91.