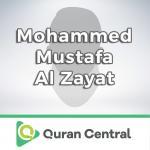 Sheikh Mohammed Mustafa Al Zayat was brought into this world in 1981 in Alexandria, Egypt and is one of the most prolific and eminent names in the world of Quran Tilawat and Tajweed.

After having sought a graduate degree in Mathematics, he shifted his interests to the learning of Tajweed and this step made him enroll into the Institute of Quranic readings Al Azhari. Sheikh Mohammed Al Zayat did not contain himself here itself but went ahead and sought the guidance and expertise of prominent Shaykhs like  Sheikh Misbah Ibrahim Al Dasouqi, who certified him in “Ten Minor Readings” and Sheikh Tawfiq Ibrahim Damra who certified him in “Minor Readings” and Sheikha Oum Al Saad, daughter of Muhammad Ali Najm who certified him in Assem recitation and also a certificate according to Abi Amru Al Basri from Sheikh Abdel Hamed Yousef Mansur no to forget another important certification according to Nafie, Ibn Kathir, Al Kisa’i, and Abi Jaafar from Shaykh Muhammad Sukkar.

Sheikh Mohammed Al Zayat began his professional graph by conducting Imamat in Umm Al Mu’minin Aisha mosque, in Backus district and progressed on to render services as an Imam and a teacher of the Tajweed and the Quranic readings and the Quranic memorization in the same Masjid.