Listen to Muhammad Abdul Kareem on: 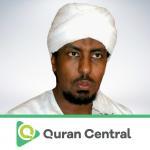 Sheikh Muhammad Abdulkareem was brought into this world in 1968 in Dongola, Sudan. He has extensive mastery over the Qur’an recitation and Tajweed nuances which thanks to his psalmodic baritone has reached and made a place in the hearts of the Muslim Ummah worldwide.

He began his quest for education by graduating from the renowned King Abdul Aziz’s university in Jeddah, in the faculty of letters Islamic studies Department after which he progressed on to postgraduate and also receiving a Ph.D. in the same discipline but from the University of Khartoum.

In 1983, under the able guidance of noteworthy greats like  Sheikh Muhammad Al Sisi, and Sheikh Ahmed Sabri in Masjid Al Haram, Sheikh Muhammad Abdulkareem garnered mastery over Qur’an memorization. Getting certified was next in his well decorated education portfolio with Shaykh Muhammad Nabhan Masri with the “Seven Readings” doing the needful in 1985. In the shade of various Sheikhs and Ulema, Shaykh Abdulkareem spread his wings to grasp knowledge of “Al Rasm of the Holy Quran”, “Alfiyyah Ibn Maalik”, and “Al Aqida Al Tahawiyya”.

He was not alone in this feat and had the privilege of sharing space with stalwarts in the field of Islamic studies, Quran recitation and many other Islamic disciplines like Shaykh Al Allamah Abdel Aziz Bin Baz in Mecca and Taif, Sheikh Muhammad Al Habib Al Shanqeeti in Mecca and Shaykh Muhammad Al Saalih Al Uthaymeen.

Now, he sought to make a profession of what he had learned over the years and began by teaching the Book of Allah in Al Haram, followed by overseeing the Quran memorization seminars in Jeddah and also assisting at the University of the Holy Quran in Omdurman.

Shaykh Abdulkareem is a multitasker of sorts with him simultaneously juggling many portfolios commendably like presiding over the Islamic culture department in the faculty of “Matloub Et Al Jamiaa” and the preaching committee “Da’wa” in the legitimate association of scholars, preachers and Imams, being a coveted member of the  council of trustees of “Di Alnorin” in Khartoum, and also the advisory committee in the Ministry of Awqaf and Religious Affairs in Sudan.

Sheikh Muhammad Abdulkareem hs to his credit authored several books and publications of outstanding merit namely  “Landmarks of Integrity in the Holy Books and Sunnah” (Thesis for Master’s Degree), “Ahl Al Qibla and their legitimate rights”: (Thesis for Doctorate), “Al Aqsa mosque”: positions and morals and “The Treatment of Waswasah” in the Aqidah.

After having commenced as an Imam and a preacher in the mosque Al Mujamma Al Islami in Khartoum city , at present, Sheikh Muhammad Abdulkareem has established himself as the Imam of Masjid Al Kawtar, in Jeddah , Saudi Arabia.