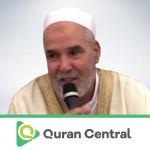 Shaykh Al-Dokaly got his education in the Institute Al-Asmari, after which he sought to procure specialization in Islamic studies from the renowned Institute of Malik Ibn Anass in Tripoli, Libya.

Post seeking a sound education, Shaykh graduated in Arts in Sharia and Law from the Islamic University in Bayda, which also allowed him to maintain various positions of importance namely Khateeb in the mosque of Balmain in Tripoli, Imam and a teacher of the Quran at the faculty of Daawa Al-Islamiya.

The official and coveted designation of general director of legal affairs of the General Authority of Islamic Affairs and Endowments in 1998 was a stepping stone in the life of the Shaykh for future lucrative prospects.

He also led prayers as an Imam in Moulay Mohammed Mosque, Morocco.