Listen to Nasser Al Qatami on: 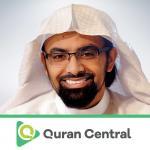 Nasser Al Qatami is born in Riyadh in 1980. He is among the famous reciters in the Persian Gulf and the Arab world.

He has acquired a  bachelor’s degree in Islamic studies and has also the fortune of being awarded an honorary doctorate from Al Hayat University in the Egyptian capital Cairo.He was captivated and mesmerized by the best reciters, such as Sheikh Bakri Tarabichi, Sheikh Mohammad Ayub, and Sheikh Mahmoud Sokar.

He commenced Imamat at a young age of 14, he has various accolades to his credit which includes his chairmanship in the administrative council of the Ayat Al Quran Al Karim group, and his membership at the Saudi scientific association of the Quran and its sciences.

He is presently the Imam and the Khatib of the Princess Latifa Bint Sultan Bin Abdulaziz mosque in Riyadh.