Listen to Noreen Muhammad Siddique - Al-Duri via Abu Amr on: 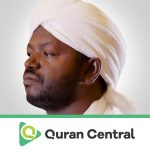 Sheikh Noreen Muhammad Siddiq was born 38 years ago in a town called Farajab in Sudan, and he studied boarding in Khorsi in 1998, and was a student of a great scholar named Sheikh Makki in Sudan.

After graduating, he went on to study Islam in Khorsi. He spent 20 years seeking education under various scholars, but later became a disciple of Sheikh Makki in Khartoum, the Sudanese capital.

Noreen started out memorizing the Qur’an on the palms of Khalawi’s sheikhs in Bara district in North Kordofan nation in 1996, and have become involved in advocacy work at the start of the millennium after the authorization of analyzing from Al-Azhar in 2008.

Noreen Muhammad Siddique, labored as an imam on the Khartoum Grand Mosque, Mrs. Sanhouri, the Al-Nour Mosque, and some of famous mosques within the capital, Khartoum.

Sheikh “Noreen” changed into born in Umm Dam locality in North Kordofan state in 1982, and grew up in a spiritual house. He memorized the Qur’an with intonation on the age of 17 years on my novels Al Douri and Hafs, after which he studied on the clinical Institute, then joined the Islamic Holy Quran university and graduated there.

He died in Sudan after a car crash along with several other guards.