Listen to Salah Al Hashem on: 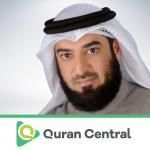 Salah Al Hashem is of Kuwaiti origin and was blessed into this world in 1980 and is a renowned name in the field of Quran recitation.

Shaykh Nasser Al-Othman and Sheikh Adnan Abdul Qadir are the driving forces behind Shaykh Hashem’s success in the discipline of tilawat of the Quran and the memorization of the Holy Quran can be credited to the famous Sheikh Khamis bin Abdel Azim.

Sheikh Salah Al Hashem garnered precision over the nuances of Tajweed from stalwarts like Mahmoud Khalil Al Hussary, Mahmud Ali Al Banna and Muhammad Siddiq Al Minshawi who ensured his success in this discipline too.

Imamat was the next leap for this Shaykh as he commenced the same in the Grand Mosque in Kuwait while also leading the Taraweeh and Al Qiyam prayers in Maryam Al Qutami Mosque.

Sheikh Salah Al Hashem is very active on the social media platform too and used it for the progress of Deen by launching the “Calendar of Hashem app which is also touted to be the numero uno acoustic audio Islamic calendar in the world. He has also lent his harmonious baritone to various Islamic nasheeds, prominent among which are “I am the poor”, the album “I came to you”, and also the album “Labbaik”.