Listen to Saleh Al Sahood on: 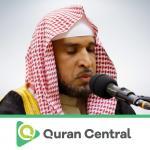 Sheikh Saleh Bin Salem Al Sahood is a Quran reciter and an Imam who is famous and renowned in the Saudi Arabian mosques.

His graduation took place at the faculty of Shari’a and Islamic studies in Al Ahsa city and he has also been certified according to Hafs Aan Assem’s and Warsh Aan Nafas recitation methods.

Currently, he is conducting Imamat in Masjid Saad Al Hussein while multitasking by lending his services on the media front too by being a Qur’an reciter in Al Majd Television channel.