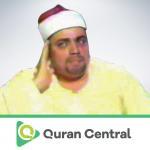 At the tender age of 7, he had already accomplished Hifdh of the Quran after which he shifted base to enroll himself into the faculty of Osoul El Dine, branch of the Akida and philosophy in Al Azhar University.

Sheikh Shaban Abdul Aziz has rendered his services at various eminent institutions like religious institute in Samanoud, followed by the Religious Institute in Pagoor and the Menouf Secondary Institute, succeeded by Awqaf Directorate, before finally getting appointed as a Deputy Minister in the Ministry of Awqaf.