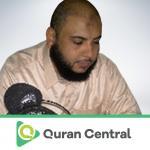 Taha Mohamed Abdulrahman Al-Fahad is born in Libya in 1982.

Taha Bin Mohammed Bin Abdulrahman Al Fahad is a renowned figure in the Islamic sciences discipline particularly that of Qur’an recitation and preaching.

Sheikh Taha Al Fahd was granted the knowledge of the memorization of the Book of Allah by the eminent Shaykh Mohammed Al Saleh Al Salem Al Asmar at the tender age of 12. Taha Al Fahd’s certification happened according to Qaloon Aan Nafas recitation method which was succeeded by Rasm of Abi Abdullah Al Shiraishi Al Kharraz from the Ministry of Awqaf in Libya and a certification by Sheikh Waleed Bin Idriss Al Maneese with the Sanad related to the messenger of Allah ﷺ.

His professional graph took him towards conducting the Imamate of Al Tawheed mosque in Tripoli, and Al Salam mosque in Sebha following which he was sent by the Ministry of Awqaf and Islamic Affairs to Ghana to seek his services as an Imam in the Masajids there and not to forget to Canada in the mosque of Toronto.