Listen to Talaat Afifi on: 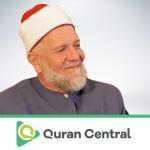 In December 1953, Talaat Mohamed Afifi Salem was born in Giza, Egypt and moved presumably quickly towards his goal of being a known name in the field of Qur’an recitation and preaching which he successfully managed to do.

After completing his elementary education, he ventured towards obtaining his secondary diploma in al Azhar in 1971 which he topped with enrolling himself into the faculty of Usul ad-Deen in Cairo and graduating in Islamic Da’wah and culture in 1979 followed by a postgraduate degree in the discipline about “The Islamic Approach in Addressing the Motives of Human Behaviors”. Success knocked at his doorsteps when he achieved the icing on the cake in the form of an honorary degree with the doctoral thesis on the topic “The Story in the Sunnah and its Impact on the Islamic Call.”

Lecturing at the Faculty of Islamic Da’wah in Cairo and then being designated the coveted spot of being the head of the Islamic Culture Department till he took over as the Dean of the College were the highlights of his professional graph.