Listen to Tawfeeq As Sayegh on:

About Tawfeeq As Sayegh 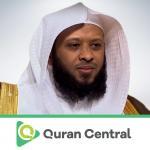 Tawfeeq As Sayegh is born in 1974, in Asmara, Eritrea, Tawfiq Bin Said Bin Ibrahim Al-Sayegh is a Qur’an reciter par excellence who is not short of any recognition and adulation.

A student of Scientific Institute of Jeddah, Tawfiq As Sayegh sought to expand the horizon of his knowledge and this led him to enroll himself into the Imam Mohamed Bin Saud University and the Umm al Qura University of Makkah.

Sheikh Tawfiq As Sayegh is multitasking several tasks albeit with utmost ease and clarity , chief among which are being the president of the Eritrean community in the Communities Bureau of Jeddah and the General Committee of the Holy Qur’an Prize Faleh Al-Thani of Doha while also rendering his reputed services as a teacher in the primary school Amjad Al Ahliya in Jeddah.