Surah – Al-Ala (The Most High, Glory To Your Lord In The Highest) by Abdur Rasheed Sufi in the Qiraat of Khalaf an Hamzah 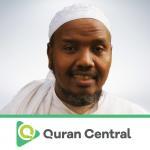