Listen to Miqdam Al Hadary on: 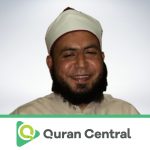 The world heard his first cry in Kafr Al-Miqdam, Mit Ghamr on 14 April 1965. From his childhood, his mother would often refer to him as “Sheikh Miqdam” and treat him as if he was a Sheikh. His father was a simple farmer and saw his young son praising Allah by looking at the sky.

Growing up, Sheikh Miqdam had a keen interest to explore the beauty of Islam. He had always accompanied his Sheikh and teacher, learning from him both in primary and high school. Following his high school graduation, Sheikh Miqdam signed up for the well-known Al-Azhar University and completed it with tremendous success. Following this, he joined the Faculty of Dawah and Fundamentals of Religion in Cairo. Unfortunately, his mother died when he was at university, leaving his father as a widower. After this sad loss, Sheikh Miqdam Al-Hadary was blessed with a beautiful spouse whom he had met in university.

After their marriage, they had children and was also known as ‘Abu Salah’. He was extremely keen to teach his children Islamic sciences alongside the memorization of the Quran. Sheikh Miqdam would often show tender feelings towards his daughters and discuss big matters with his sons.

Concerning his Imamate positions, he was Imam at the Muhammad Metwally Al-Shaarawy mosque. His position at the Muhammad Metwally Al-Shaarawy mosque made him famous due to his powerful recitation and influential speaking style. He would be at this mosque approximately three days a week and the rest of the week would be spent at another other mosque.

Sheikh Miqdam Al-Hadary was a popular face and became famous on the prominent ‘Al Rahma channel’. His two hosted serieses on Al Rahma Channel were a crowd favorite. These were “Mosque Messages” as well as “Historical Parts”. Alongside the famous Sheikh Mohamed Hassan and Sheikh Magdy Arafat, the three were inevitable parts in Islamic television programmes running many discussions, radio calls and interviews.

During 2010, Sheikh Miqdam Al-Hadary was invited to Siwa Oasis, an urban oasis in Egypt between the Qattara Depression and the Great Sand Sea in the Western Desert. The drive was approximately 9 hours away. The Sheikh accompanying him tried to hurry him up. The sweet nature of Sheikh Miqdam told him to leave the lateness alone. Following this, he requested the Sheikh accompanying him to recite some Quran and to send 1000 Salawat upon the Prophet Muhammad ﷺ without any distractions. After this, Sheikh Miqdam commented that some cars were traveling so fast that it was similar to being chased by the angel of Death. Moments later, Sheikh Miqdam and the other Sheikh had a car accident. The Sheikh survived, but Sheikh Miqdam spent 3 whole months in an Alexandrian hospital with a brain hemorrhage. He sadly died aged 46. His funeral was attended by thousands of fans, family and friends.